Short-Term Assignments Are Not for the Weak

Five more weeks in Uganda! The time has flown by. We are anxiously awaiting the arrival of Jake next week (on his 20th birthday) and Nate and Sara the week after that.  We will take the opportunity to be tourists with them.
Many of the ex-pat staff at Uganda Christian University use the summer months for home leave, so they have been gradually trickling out of the country. Some of our Ugandan friends are busy with the beginning of the new semester, or are off-session and have left campus.
Our Luganda tutor and recent UCU grad, James, accepted a job in Iraq. Another example of the global economy – US contractors with big defense budgets hire Ugandans to work in a variety of functions.  They pay them in Ugandan shillings, and presumably,  between  the favorable exchange rate and depressed Ugandan salary expectations, cash in.

It’s going to be tough to say good-bye. Beth found a Peace Corps Zaire/Democratic Republic of the Congo Facebook site with many photos of people we both knew in Peace Corps in the (gulp!) 70’s and early 80’s.  Looking at them reminds me of another time in my life when an intense African experience forged deep bonds.
We spent Easter weekend traveling to the home of Joyce, John and Hannah Kateeba, in the western part of the country. We stayed in their home in Bushenyi, where Ugandan honey comes from. We now know about 200% more about Uganda than we did before we went. We visited a retired army major/politician; a banana flour factory funded by the Japanese; two different churches; a traditional wedding ceremony; a baptism party, and Uganda' s only winery!  We saw zebras grazing by the side of the road, and the rolling hills were covered with eucalyptus trees, tea plants, and bananas.  It was a wonderful, if exhausting, trip.

The Introduction/Wedding
An introduction is a big formal party prior to the actual wedding. The ceremony we attended was a combined version that lasted for hours and featured (besides a downpour) lots of food, music, rituals and speeches.


The Matooke flour plant
We visited a plant-under-construction for processing the starchy banana matooke into flour called "Tooke" flour.  There are a lot of advantages to central processing of a food staple, including waste handling. There are trash piles in every town now that are mostly banana peels. 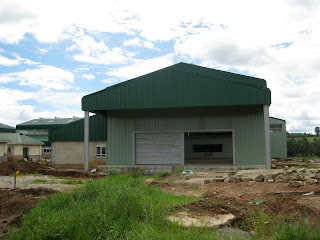 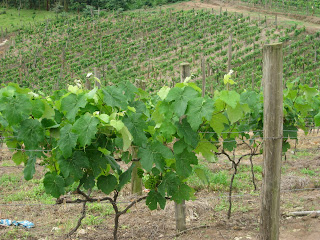 The Only Vineyard and Only Winery in Uganda

A neighbor and friend of the Kateebas has a vineyard and winery. It was a frankly amazing thing to see. The wine is called "Valley Wine". It helps finance a school that is also on site. 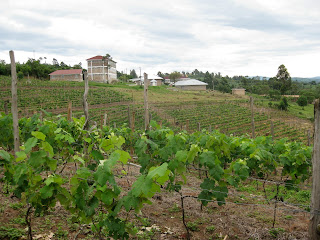