We arrived at Uganda Christian University  approximately 45 hours after leaving our house in West Lafayette.  It was around 2:00 a.m. local time on Wednesday morning.  Four days later, we are still working on regularizing our sleep schedules, although it’s getting better.  We flew from Indianapolis to Chicago, on to Brussels, Belgium, then to Kigali, Rwanda; and finally Entebbe, Uganda.  The flights were not remarkable except for the transatlantic leg. The passengers in front of David talked the whole time – eight hours. I would have thought this was impossible, especially for people with such loud voices.

We have been here less than a week, but are learning quickly.  We have a small but tidy flat near the science buildings that we are stocking bit by bit with amenities. Our fellow ex-pats have been tremendously helpful, especially the Fountain family, Americans who have been here for six years, and John Smith, a British former headmaster and chaplain, who fed us our first Ugandan meal. 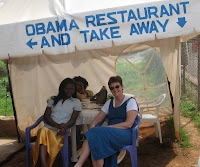 We have cell phones (numbers below. Text us!), and a new internet modem that we hope will help us keep in touch. We have walked into Mukono several times and been to the market, grocery stores and the Obama Restaurant and Take Away there. David identified a hadada ibis in our back yard. We went on an excursion with the Fountains to Kampala. Driving in Kampala is like the old line about Ginger Rogers – she did everything Fred Astaire did, but backwards.  There, it is driving in the worst traffic you’ve ever seen, times ten, and on the wrong side of the road!

Uganda Christian University is a lovely campus. This is a shot of the main gate with a car decorated for a wedding and the ubiquitous boda-bodas, or motorcycle taxis.  We have been convinced that only people with a death wish get on these things.

David is still waiting to get specifics about his exact duties.  We are busy enough in the meantime and reeling with the differences between our Peace Corps days 30 years ago in neighboring  Democratic Republic of the Congo, and modern Uganda.  More on that later. We miss everyone but can’t resist mentioning that the sun is shining every day here!