Reality Check
Beth:  Prior to last weekend, we had talked about writing a blog called “What is not to like about Uganda?”  Then we took a three-day trip to Gulu, a dry, dusty town in the northern part of the country.  We stayed at Lukome Center in a rural area at a project called ChildVoice , where young women who were abducted by the Lord’s Resistance Army  and forced to be child soldiers and sex slaves, are rehabilitated.   There is a whole lot not to like about that.
So, we’ll start this journey through the last month and a half with that trip.  We went with the Uganda Studies Program, a study abroad for US students.  Our group was all female, and all from Christian colleges in the US. They were wonderful. It was heartbreaking to compare them to the traumatized young mothers at the center, but in an odd way (subject to further mental processing on this end) it was kind of a hopeful and inspiring trip. 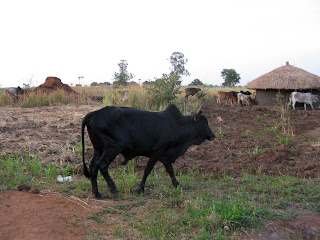 Cattle wandering the neighborhood. Being here made both of  us feel like
we were really back in Africa.


We have gotten out of town several times, although a bona fide sightseeing excursion to Mt. Elgon fell through when the price tag exceeded $1600 for three days!  Without a car, we are at the mercy of high-priced “special hires” or private taxis, or using public transportation, which is cheap but dangerous. We are, nonetheless, anxious to figure out how to get to Kampala in a local taxi, which is how the majority of students and ex-pats without cars travel.
I have gone on a couple of village excursions. Once, I accompanied the fabulous Smith family to a primary school with a project called Child2Youth Foundation (http://www.child2youth.org/).
The fabulous Smiths are also a Fulbright family, from Provo, Utah. Unlike us, they brought their children, all five of who seem to have come willingly. We went to the village on a very hot March 8, which, as International Women’s Day, is a national holiday. It’s also my birthday. At the first school, we sat through a REALLY long meeting.
After another school, a clinic visit, and a long ride home, the Smiths dropped me off on campus and drove away singing Happy Birthday.  Maybe you had to be there, but it was hilarious.

Baptism
I accompanied a UCU professor, Anglican reverend, and missionary, Dan Button, to a Kampala-area church when he baptized a former student’s first child.  Another long day, but a fascinating experience at the formal Luganda service.
Filling those long, lonely hours
Long vacations are only fun if you have something to do, so I started volunteering. I am working with the UCU Department of External Relations to develop a career center strategic plan and volunteering at the Children’s Library on campus. David and I spent a really fun week training student interns in group work and counseling.
Most Ugandan university graduates don't have jobs when they graduate, and some never get on a professional track.  I took a boda boda (motorcycle taxi) today and the driver was a UCU graduate in social work. Boda drivers are stereotyped as (male) entrepreneurs who are so unsuccessful in the end-of-primary-school exam that they never even go to secondary school.   This guy was an obvious exception.  The economy just doesn't support high employment. Even so, the culture isn't very competitive and students don't hustle to get their CVs (not resumes!) done or grab internships and leadership opportunities. One HR person I spoke with said that Ugandan culture de-emphasizes personal accomplishments, so many people are uncomfortable talking about them. Someone else attributed it to Christian humbleness. Whatever, it's a lot different than B-school in the US!
Random scenes from beautiful Uganda Christian University and Mukono
A new time-consuming hobby for me is scanning job listings for Africa. Both of us would love to come back on a more permanent basis, but only one of us is currently unemployed.  The proliferation of NGOs (Non-Governmental Organizations) engaged in development work, the multitude of self-funded volunteers, and the vocabulary of international aid are taking time to sort out. Especially, since thirty years ago, the only aid organizations that I recall in the Congo were missionaries (overwhelmingly Catholic), misbegotten USAID projects, Oxfam, and Peace Corps. Those were simpler days, for sure.


David:
Winding up/down
We are fast approaching the end of our semester here at UCU (and the halfway point of our stay!).  As we write this entry, we are in the last week of classes, then a week of review (UCU’s version of “Dead Week” at Purdue), and then final exams.  Our Environmental Health class has had a series of field trips the last few weeks to see various sites that demonstrate and apply concepts related to environmental issues, assessment, and mitigation.  Fortunately, Beth has been able to accompany us on each trip.


My teaching partner for the class, Dr. Sarah Kizza-Nkambwe, is also lecturing at UCU for the very first time, but as a Ugandan and hopefully as a soon-to-be full time employee of the university, she has taken the lead in contacting the people at these sites, arranging the logistics and budget for everything from lunches to transportation to “honoraria” for all of the hosts.  So far we have visited two different agricultural research stations outside of Kampala. Both sites are affiliated with Makerere University, the premier public university in Uganda founded in 1922.
The highlight of both of these trips has been the chance for Beth and me to get to know Sarah and the students on a much more personal level than is possible in the fairly formal and stuffy confines of the classroom.  As some of these photos show, the students love to leave campus, and their true colors shine through once we are on the road and in the field.
Of course, these trips include uniquely Ugandan flavors, such as squeezing more than 20 people into a minivan that is clearly labeled “Maximum Occupancy 14 People”, using banana leaves as an impromptu umbrella during a downpour, eating lunch in the open air market on the outskirts of the Makerere campus (think Chauncey Village back at Purdue), and getting a mud bath thanks to the unpaved country roads.

(Cue Clapton’s “Let It Rain”)
Speaking of rain, the rainy season has FINALLY begun.  The recent downpours, some of which have lasted for hours, have brought back many memories of similar experiences in Congo during my Peace Corps days.  There is something very unique about the sound of an approaching storm.  Rain on tin roofs makes a very special sound, almost musical, yet monotone.  As a rain front approaches, you can hear the sound of the rain falling on the roofs of the nearby buildings, and it gets louder and louder until it finally hits your own roof.  When you are inside the building, the noise is so loud that it drowns out most other sounds.  It is actually a very soothing sound, great for promoting restful sleep at night or a relaxing afternoon nap.

Lastly
We promise to be more timely with blogs. Sharing a computer, combined with frequent unscheduled power outages really puts a crimp in internet-based projects, but we'll try.
Posted by Beth Burnett at 11:26 AM